While the production in Sable Maze: Forbidden Garden is top-notch, the gameplay feels lacking. It is a relaxing family-friendly game with gorgeous visuals, but if you are expecting something less-cute, unique or challenging you better look elsewhere.

TOTAL SCORE
You have rated this
It seems like during the recent months, many developers have moved on from creating dark and mysterious HOPAs to bringing us bright and colorful fantasy games. It felt refreshing at first, but now it is starting to feel repetitive and a little bit tiring unless the games contain something creative or unique. Sable Maze: Forbidden Garden is the third game in the Sable Maze series; unfortunately, this sequel is no longer based on realistic, ominous events – instead, it went on to follow the fantasy trend.

On the day of your wedding, your fiancé, Ryan is kidnapped by a mysterious force through a magic portal right inside the forbidden maze in your very own garden. It seems like every single recent game is consist of a ‘portal to another world’ of some sort, and this is no different. In fact, the parallel world in this game is perhaps one of the most magical ones we have seen. It is filled with witches and fairies, fairy-tale creatures and of course, spells and magic.

Despite the unoriginal story and the run-of-the-mill concept, Sable Maze: Forbidden Garden is extremely impressive to look at. The art team of Daily Magic has definitely improved over time as the artwork in this game is their best yet. Each location is like a dream come true, with vibrant colors and sharp graphics. Furthermore, the cutscenes are excellent, the voice overs are great and the music is splendid. 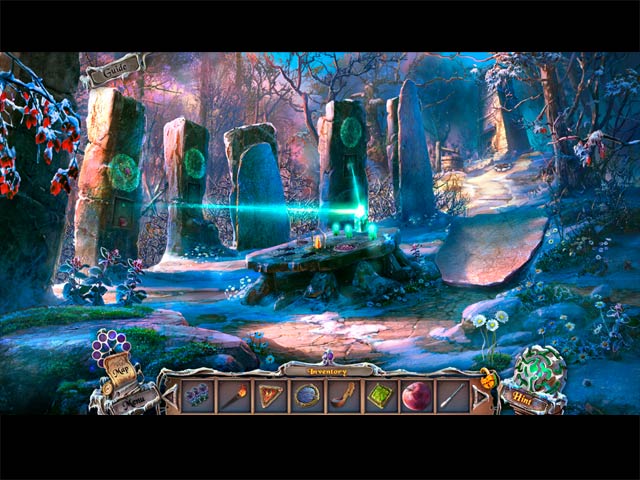 Sable Maze: Forbidden Garden is also fun to play, if you do not mind the lack of challenge. The gameplay is very straightforward, the kind that can be expected from a CE-standard HOPA. The hidden object scenes are nicely done, many of them are progressive and they can be switched with Match-3 boards. What is more disappointing are the puzzles; most of them are not very innovative as well as very easy.